3-10-2021 Today I pulled into the Ryde Exploren roadside charger, which I had used before, but this time wouldn’t start charging. My car screen said no power coming from the charger and the Exploren app said it was waiting for my car.

With Exploren you use you own cable. After wondering what to do I double checked my cable plugged into the charger and it wasn’t fully in. You need to push it in firmly and I didn’t. So, as soon as I pushed it in more firmly, about 1-2mm more, it started charging – a thing I need to remember when using my own cable at chargers.

22-9-2021 went for drive to do exercise in some remote parts of my LGA. Traveled 168km using 180km of est range. Which means actual travelled was 7% less than the estimated range on the screen, which is good to know. 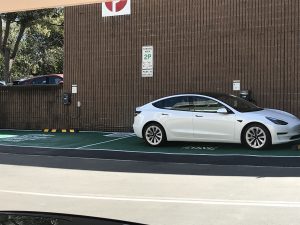 19-09-2021: This morning added 50kms locally with aircon running all the time. Decided to top up. After my local driving I had reached 69% so that is 10% of charge used for 50 km travelled which sounds about right for stop start local trips, including leaving climate control on while parked.

Tried my new Type 2 Mennekes cable at a Ryde council free public charger. The charger uses the Exploren app and it all worked easily, delivering 12kW.